The Reactive Cube reimagines the computer screen as a three dimensional display, transforming individual pixels into tangible objects. Light appears to take on physical form, imbued with a living intelligence that responds to human interactions.

The volumetric effect is a product of the interaction between projected light and a specially prepared oil that stays suspended in water. The micron-sized particles of oil capture the projected light and glow a blueish white, effectively extruding 2D images into 3D objects.

Each version of the project uses a form of interface that directly interacts with the human body, invoking a tangible connection with the light inside the volume.

Screens are impressively versatile windows onto illusionistic spaces. Their glowing pixels are mezmerizing conjurors, adept at capuring our gaze as they narrow our focus. Yet anything made for a digital display is also destined to exist on a two-dimensional grid, to remain predictably fixed in space. Screens lack the texture and dimensionality of everyday life. I wanted to prise the pixel from its grid and bring it into the physical world, liberating the display into three dimensions.

Crossing the boundary from image to object involved developing a medium that would capture the pixel as projected light. This research involved working with chemists to formulate an oil that would stay suspended in water. Once mixed with water, the chemical disperses into micron-sized particles that stay evenly distributed throughout the cube.

The bluish glow is a result of the same phenomena that causes the sky to shine blue - also known as Rayleigh scattering or the “Tyndall effect”. White light interacts with the oil droplets and the blue end of the spectrum scatters outwards.

The transparent visual qualities of the display called for an interface that also felt transparent to the user. This insight led me to develop my first natural user interface - a simple light sensor that measured the density of the mist inside the first iteration of the Cube - which I named Particle Screen. Subsequent versions of the Cube have included more sophisticated ways of seeing and listening to people’s bodies, giving human gesture and voice ever subtler control over the interactive image.

The Reactive Cube project also initiated a career developing Natural User Interfaces for interactive exhibits, where I continue to develop new languages of interaction for immersive experiences in art, design, and education. 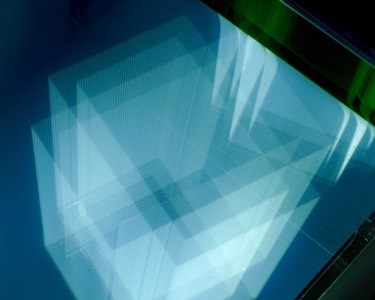 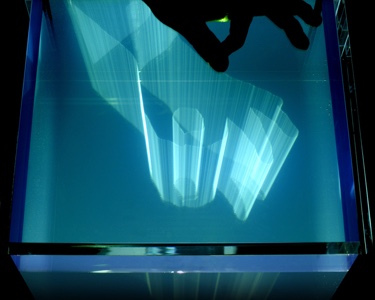 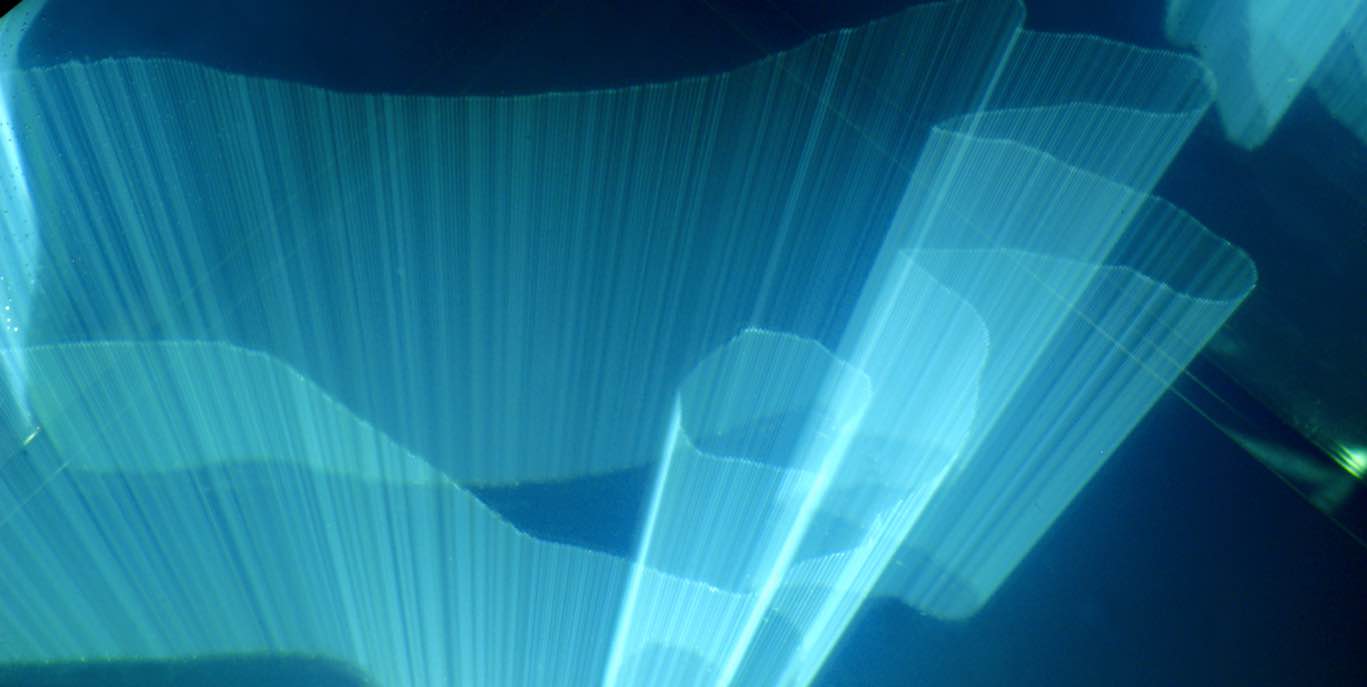 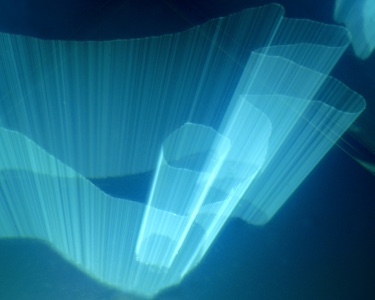 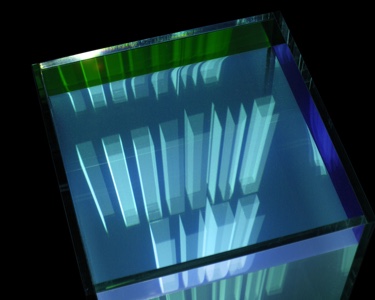 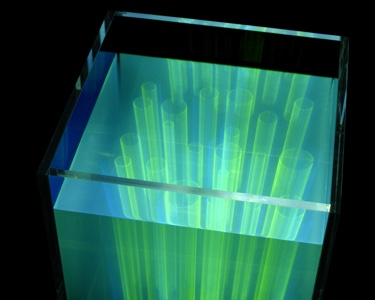 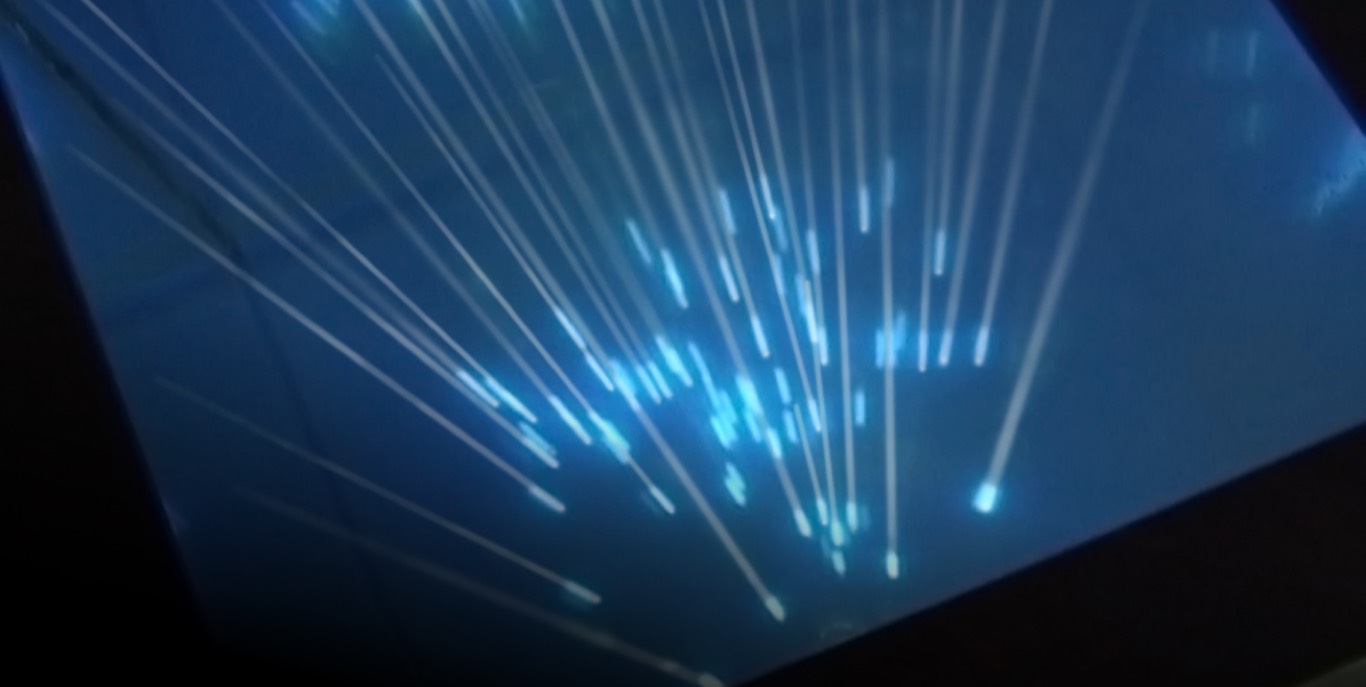 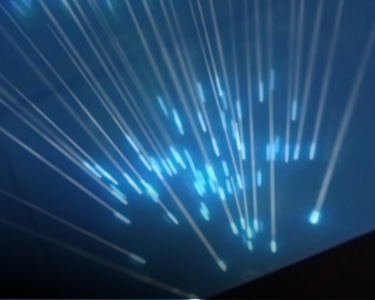 Each iteration of the Reactive Cube explores a different form of natural user interface - technology that effectively remains invisible, so the user’s own body becomes the interface. These videos document my experiments activating the cube using technology that responds to breath, sound, and hand gestures.

Particle Screen was designed to respond to the lightest of interactions; gentle breaths of air blown into swirling clouds of water vapor. Inspired by the swarming behavior of insects that gather above water, I wanted to give these lights a behaviour that suggested a collective intelligence.

Left undisturbed, the glowing particles flock toward the center, as if attracted by an invisible force. Blowing into the Cube instantly stirs the group into a frenzy, scattering the particles to the edges and transforming them into slender threads of light that zoom upwards toward the viewer.

Created in collaboration with Tomas Roope and Andrew Allenson, Arabic displays geometric forms that rotate, divide, shatter and recombine in response to the human voice or music.
‍
Arabic has been exhibited at the Lafayette Galleries in Tokyo, the IDN Design conference (International Designer’s Network) in Singapore and RX Gallery in San Francisco.

The Reactive Cube behaves like a shadow theatre in reverse - drawing a pencil thin line of extruded light around the edge of a silhouette. The cube detects hands held above the opening, mirroring their shape in real-time to produce an illumiated “shadow” that feels connected to the user’s body.

This project has been generously supported by: